Storytelling Secrets: How to Tell a Meaningful Story~ by Katelyn 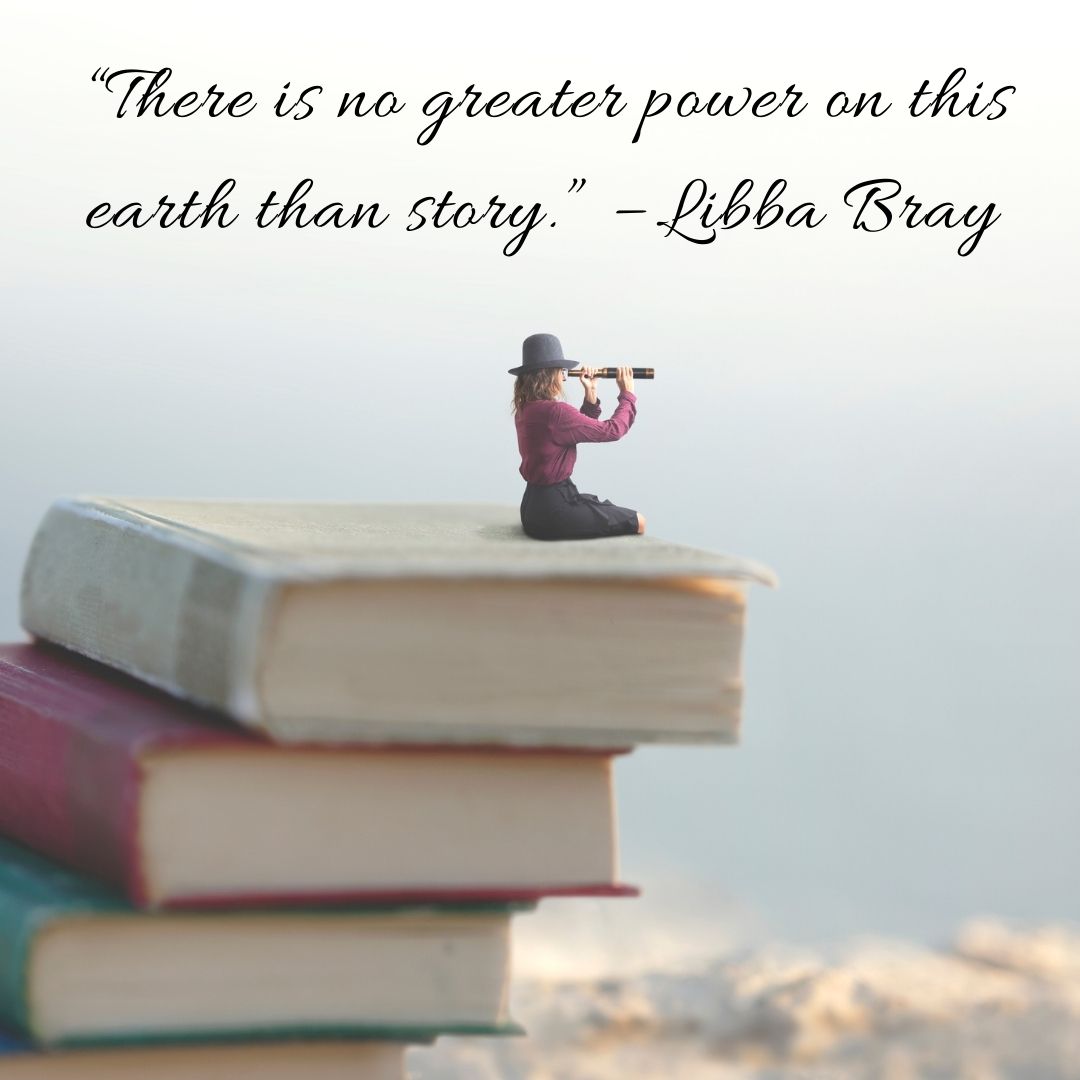 Everyone has that one music album that makes them feel unlike they ever have before. Or maybe it’s a book. Or a piece of artwork. Whatever the case, everyone has experienced that indescribable feeling of being connected to something that someone else has created.

A story that keeps you up late at night reflecting on the ending, a song that you play on repeat over and over again, even though it makes you cry every time you hear it,  that piece of  art that you keep revisiting in a gallery because for some unknown reason it speaks to your soul.

The first time I listened to My Chemical Romance’s The Black Parade album was magic. It was unlike anything else I heard before–it was dramatic, unapologetically emotional, and had an incredible storyline behind it. I was instantly hooked. From there, I listened to more of their music, including their first song, “Skylines and Turnstiles”, which instilled me with that same feeling. I wondered why MCR’s music was so appealing to me, why it was so special, why it made me feel so deeply and so powerfully. And after careful thought, I realized that it was the story that had moved me the most. From the lead singer recounting his experience witnessing the 9/11 terrorist attacks to the fictional story of a man’s journey in the afterlife, there was something so deep and so genuine about the stories they told in their music.

And so I wondered, what makes a good story? What connects us to these stories; what makes them powerful? What’s the key to creating an impactful story that really resonates with people?

I was joined by horror author Melissa Algood and photographer Erin Mitchell, who both shared their thoughts and experiences as storytellers.

Algood discussed the importance of humanizing her characters in her work and how that plays a part in engaging the reader. An author and salon owner, Algood specializes in horror and thrillers and has been published for nearly a decade.

She said,  “Whenever I’m writing, I always think it doesn’t matter what story you’re telling, as long as the reader can connect to the characters…They need to be a real, three-dimensional person, because if it’s a flat character you’re wondering, ‘why am I reading this story?’”

As a storyteller myself, exploring both creative writing and journalism, this is definitely something that I struggled with at first. Making a character that feels like a real person can be difficult sometimes, and then to get the reader to connect with a character is a challenge of its own. But, that emotional connection is what separates a good story from a great one.

Algood went on to discuss shows such as Game of Thrones and Breaking Bad, and how three-dimensional characters in those shows cause a connection to the story. “They’re broken characters, they’re not perfect. And they show you that evil isn’t always one-sided.”

Mitchell also emphasized the emotional connection in her work, although she goes about it a different way, as she works with real clients photographing special events with her photo studio, The Delusionist. She described her process of bringing her client “in the moment”, making them really think about what the event is about and why they’re there, trying to bring out genuine emotion.

She said, “It’s not just, ‘oh I looked pretty’, it’s ‘wow, I know what I was feeling’…and that’s really going to continue to tell their story for the rest of the day, for them to be able to put their brains right back to where they were and relive it.”

I found this to be a very interesting take on photography. It’s not just a photograph, but art, something that a client will cherish forever. To create that kind of emotional connection with a snapshot of a single moment, that takes talent.

Mitchell explained the importance of preserving the story of the client, telling it as unbiased as possible. She said, “I don’t try to create the energy, I don’t try to create emotion, I only try to see what’s there and pull it out of people…As storytellers, we’re not always story writers. We’re telling somebody else’s story in a lot of different ways, and not always telling our own stories.”

This could apply to a lot of other mediums as well. Journalism, for example. In my own limited experience, staying objective when writing an article on an issue can be very hard to do. But, it’s important to tell only the facts and leave your opinion out of it, because the point is for your audience to form their own opinion based on the facts you’ve laid out for them. Because it’s not your story to tell, it’s someone else’s story that you are reporting out to the world on. I found this parallel between these two very different mediums fascinating. Algood had something similar to say regarding her creative writing and not forcing a story on her characters.

She said, “That’s what I would say, let go of your ego and try something new. And let the characters speak. The story is not about me, it’s about the characters. And once I publish it and it’s out there, the readers get to interpret it in a whole different way.”

I’ve always found that process of give and take between artist and audience so beautiful. The fact that the author can put something out there and the readers can make the author’s work mean what they need it to mean to them at any given moment is so powerful.

Algood discussed her process of getting into the minds of her characters, really understanding them and what needs to be done for the sake of their story. She said that sometimes it’s difficult, making something terrible happen to a character when she desperately wants them to have a happy ending, but oftentimes it’s necessary.

“I’d ask every storyteller to let the story tell itself in a way and you become a siphon for the story, almost like a secretary,” she said.

This piece of advice was really helpful to me personally. Recently, I’ve made more of an effort to really get to know my characters and to get into their minds, and I’ve seen a huge improvement in them. I think that this is the key to making more genuine characters–getting to know them and figuring stuff out about them to make them feel more real. And if you can make them feel more real, then your audience is more likely to connect to them.

Both Mitchell and Algood have certain things that interest them in a story, whether it be the emotional aspect, relatability, or unpredictable plot twists.

“The new, the innovative, the wackadoodle crazy off-the-wall, the skulls and the blood and the ravens–those are the things I very much latch onto,” Mitchell said, “And those are the things that are very much related to my personal life and not wanting to be seen as ‘normal’ or ‘typical’.”

Algood also expressed an interest in telling the same old story in a different way, discussing interesting storylines and storytelling techniques that she’s come across over the years.  But she also emphasized the emotional aspect of stories. She said, “Anything that brings me to tears, that really tugs at my heartstrings, is what I want… I want to read difficult stuff…I really do just love something that brings out an emotional response to you. It can be a picture, it can be a song, it can be a book, but anything that brings about an emotion that you’ll remember forever.”

She cited John Green’s The Fault in Our Stars, recalling a line that she remembers even now, “There was this specific instance where the characters were talking and my heart broke. [One of the characters] said, ‘They took an x-ray of me and I lit up like a Christmas tree’. And I read this book 15 years ago or whenever it came out, and I still remember that line, because that line hit me in the gut.”

Algood talked about how it’s lines like that that really help form that long-lasting emotional bond, allowing the audience to remember a book long after they’ve finished reading.

And really, I think that’s the most important thing. To make an audience care, to make them remember. That’s a huge part of any kind of art, and while it’s difficult to do, it’s highly rewarding.

Mitchell said sometimes it’s the effort and the attitude of the storyteller that really makes a difference in the overall feel of a story. Knowing someone worked hard and went above and beyond for their story and shows they actually care causes their audience to care.

She said, “I appreciate the journey I see behind the image sometimes more so than the image itself, knowing how much love and tears and emotion and effort that the person creating it has put in there.”

Speaking with Mitchell and Algood was an incredibly enlightening experience. I’ve always loved telling stories, so their advice will definitely be kept in mind as I continue my journey as an aspiring storyteller.

Love to hear about your thoughts on what Melissa and Erin shared with you. Knowing the process that these two storytellers use and why, how does that shape you and your storytelling? What are your thoughts about what makes a good and intriguing story? How are you using this to create your own stories?

You can find Mitchell on her Instagram or on The Delustionist website, and you can stay up-to-date on all of Algood’s newest releases, including her newest book, The Girl in the Fog on her Twitter.